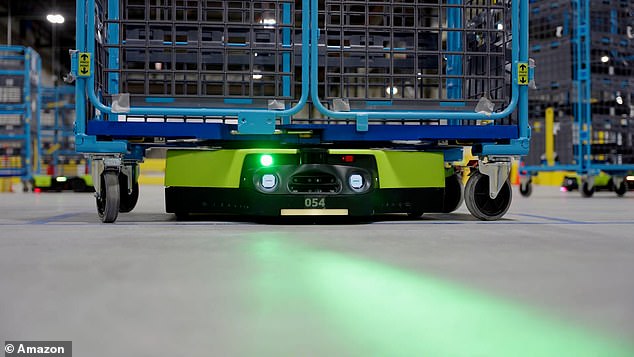 Over the past decade, Amazon has built an army of robot workers to sort packages and move products safely through its warehouses.

The company has now unveiled its latest robot called Proteus, which it describes as its “first fully autonomous mobile robot”.

Like Amazon’s current warehouse robots, Proteus is designed to move large carts full of packages around the warehouse floor.

But while its usual robots must operate in a caged area away from human workers, Amazon says Proteus will be able to move freely around the warehouse.

The robot uses Amazon’s own safety, perception and navigation technology to move around autonomously and avoid bumping into human workers.

“Historically, it has been difficult to safely integrate robotics into the same physical space as people,” the company said in a blog post.

“We believe Proteus will change that while remaining smart, safe and collaborative.”

Proteus is designed to work alongside humans, moving large carts full of packages around the warehouse floor

In a video of the new robot, Proteus can be seen sliding under one of Amazon’s “GoCarts” – the non-automated carts used to move packages around the company’s warehouses.

A panel in the center of the robot lifts up, raising the GoCart just inches off the ground.

Proteus then begins its autonomous journey through the warehouse, using technology similar to that used in driverless cars to navigate aisles and avoid obstacles.

It emits a green beam in front of it as it moves, and it stops if a human worker walks past the beam.

When it reaches its destination, the center panel lowers and the robot slides and moves to the next GoCart.

“The robot was designed to be automatically directed to perform its work and move among employees, which means it doesn’t need to be confined to restricted areas,” Amazon said.

“It can work in a way that increases a simple and safe interaction between technology and people, opening up a wider range of possible uses to help our employees.”

The robot uses Amazon’s own security, perception and navigation technology to move around autonomously

Proteus emits a green beam in front of him as he moves, and he stops if a human worker walks past the beam

Amazon hasn’t revealed exactly when Proteus will hit warehouses, or how widely it will be rolled out.

However, the company said it would initially be used in the “outbound GoCart processing areas” of its fulfillment centers and sorting centers.

Amazon’s vision is to automate GoCart management across the network, reducing the need for people to manually move heavy items and instead allowing them to “focus on more rewarding work”. the company said.

Cardinal uses artificial intelligence (AI) and computer vision to select a package from a pile, lift it, read the label and place it in a GoCart to send the package on the next leg of its journey.

“With Cardinal, package sorting occurs earlier in the shipping process, which speeds up processing time in the facility,” Amazon said.

The company is currently testing a prototype capable of lifting boxes up to 22.7 kg (50 pounds) and plans to deploy the robotic arm in fulfillment centers by next year.

The use of robots in Amazon warehouses dates back to 2012, when the retail giant acquired a robotics company called Kiva for $775 million.

Although the company already had some automation in its fulfillment centers, the acquisition of Kiva allowed Amazon to quickly automate large parts of its supply chain.

However, he denies that the intention was ever to replace human workers with robots.

“Since the early days of acquiring Kiva, our vision has never been tied to a binary decision of people Where technology,” Amazon said.

“Instead, it was about people and technology working together safely and harmoniously to meet the needs of our customers. This vision remains today.

In 2019, a Center for Investigative Reporting report found that warehouses that used robots reported more injuries than those that didn’t.

Researchers found that the serious injury rate almost quadrupled in the four years after the robots were introduced at an Amazon facility in Tracy, California.

A separate report by a University of Illinois researcher found that warehouse technology can contribute to sluggish wages, higher turnover rates, employee burnout, and experiences of lower quality work, due to the way AI software can monitor and micromanage worker behaviors.

Meanwhile, a report from the US Occupational Safety and Health Administration in 2021 showed that Amazon reported higher rates of serious injuries that cause employees to miss work or move to work. lighter duties than other warehouse operators in retail.

By comparison, Walmart, the largest private U.S. employer and one of Amazon’s competitors, reported 2.5 serious cases per 100 workers at its facilities in 2020.

Earlier this year, an Amazon worker from the UK shared a video of when he was pinned down by an automatic robot carrying a stack of yellow shelves, causing him to get stuck in a maze of aisles .

“It can get crazy sometimes. These robots like to mess around, the worker said in a TikTok video,

“The robots at work trapped me. It seems like 15 minutes to get out.

However, Amazon also wants to use robots to make its warehouses safer for its workers.

Last year, the company unveiled two robots known as “Bert” and “Ernie”, which use motion-capture technology to identify potential safety issues in warehouses, so the company can make changes to reduce the risk of injury.

“With this data, visualizations and employee feedback, we seek to identify relatively simple changes that can have a big impact,” Kevin Keck, global director of advanced technologies at Amazon, said in a blog post at the time.

“Something as simple as changing the position of the handles on the bins can help to massively reduce the risk of injury to our employees.

WILL YOUR JOB BE TAKEN BY A ROBOT? PHYSICAL JOBS ARE THE MOST RISKY

Physical jobs in predictable environments, including machine operators and fast food workers, are most likely to be replaced by robots.

New York-based management consulting firm McKinsey focused on how many jobs would be lost to automation and which occupations are most at risk.

The report indicates that collecting and processing data are two other categories of activities that can increasingly be done better and faster with machines.

This could displace large amounts of labor – for example, in mortgages, paralegal work, accounting and back-office transaction processing.

Conversely, jobs in unpredictable environments are the least risky.

The report adds: “Professions such as gardeners, plumbers or child and elderly care providers – will also generally see less automation by 2030, as they are technically difficult to automate and often require salaries relatively lower, making automation a less attractive business proposition.’