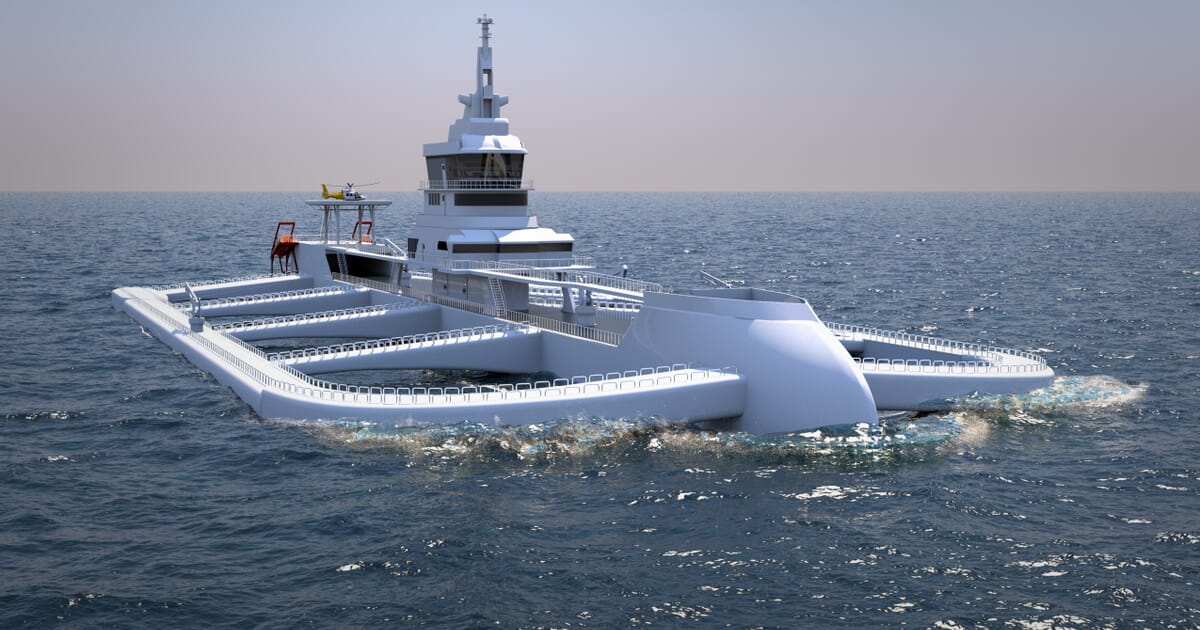 The startup has high hopes for a massive, mobile fish farm

Called Ocean Sovereign, the company was created with the participation of its strategic ally Ocean Arks Technology (OAT), created by Rodrigo Sanchez, the man who helped introduce the use of copper mesh netting to the Chilean aquaculture industry. . He is supported by Christino Stange, one of the pioneers of the Chilean aquaculture industry, who has over 45 years of experience in fish production; Hector Ruiz, a former captain in the Chilean navy, who brings his experience in maritime regulations and offshore navigation; and Karl Morris, an offshore specialist who brings experience in maritime regulations, shipping and the offshore environment.

“Ocean Sovereign is the sole owner of regulatory approvals, final working/engineering drawings and design, including upgrades to the initial base design in order to obtain approvals. We have also entered into agreements with leading shipyards capable of building such a special vessel,” says Karl Morris, the company’s business development manager.

According to Sanchez, the concentrated nature of coastal aquaculture – particularly the salmon sector – limits its growth and calls into question its sustainability. Coastal aquaculture sites are vulnerable to a range of issues, including oxygen declines, algal blooms, red tides, and the buildup of parasites and pathogens.

Basically, we’re cutting the ties that keep aquaculture on shore, putting a low-emission engine in it, adding fully recyclable copper mesh technology, and turning aquaculture into a fully mobile business.

“Mobility is our goal, keeping the fish in the best water conditions is key,” he told delegates at the recent Blue Food Innovation Summit, where Ocean Sovereign was invited to present its project.

“Basically, we’re cutting the ties that keep aquaculture on shore, putting a low-emission engine in it, adding fully recyclable copper mesh technology, and turning aquaculture into a fully mobile business,” he said. he adds.

According to the approved plans, the Ocean Arks:

While the first unit has yet to be built, milestones reported by Sanchez include successful patent applications and RINA approval. He also claimed that the “framework regulation for multiple territories to ensure production approval” exists.

The original Ocean Ark was designed to hold up to 3,900 tons of fish and is expected to cost $22 million. Ocean Sovereign says this has increased by 50%, due to regulatory requirements and rising raw material costs. However, thanks in part to the new design increasing the vessel’s capacity to 5,000 tonnes, Morris says the Capex would equate to around $7 per kilo of fish produced – a rate that compares favorably to other offshore production systems.

It also broadly matches the cost of vessels used for shipping, offshore industry and deep-sea fishing, he adds.

Additionally, the companies claim to have been successful in raising enough funds for the first ships from maritime industry funding organizations and venture capital, so they are not under pressure to raise more at this stage.

Although the design has been deemed seaworthy enough for shipping and production, there will be many other legislative hurdles to clear before fish farming is actually allowed in each country’s Exclusive Economic Zones (EEZs). Meanwhile, according to Morris, production is already permitted on the high seas.

“Environmental impact assessment is mandatory in EEZs and optional in international waters, as the impact is very low – like any natural school of fish. So we don’t see that as a barrier and we’re working on it for the EEZs,” he says.

Morris also believes the mobile nature of the system will help ensure fish health and welfare.

“The Ocean Ark with low density in high quality waters drifting with natural currents as schools of fish is a fish farming solution that is the closest a fish can be to its natural habitat, bringing fish back in their place, the ocean,” he explains.

According to Morris, Ocean Sovereign is committed to working with the established aquaculture industry.

“For Ocean Sovereign, coming from the maritime world, we are not only open to collaborating with conventional aquaculture partners, we must. And we can count on strong expertise from Chile with the OAT team and other European fish farming experts will be on board soon,” he explains.

We would like our technology to reach as many producers as possible, as it will not only improve their business, but also make aquaculture more sustainable by de-concentrating coastlines and returning fish to the oceans where they belong.

“We would like our technology to reach as many producers as possible, as it will not only improve their business, but also make aquaculture more sustainable, de-concentrating coastlines and returning fish to the oceans where they belong,” adds OAT.

According to Morris, although there has been a lot of interest in the design from the existing aquaculture sector, there has been “much more interest from offshore and fishing companies, as they are used to working in this environment and clearly understand the opportunity”.

The company does not lack ambition and Morris would like to see deployed in the next five years a fleet of Ocean Arks capable of producing 120,000 tons for the American market and 120,000 tons for the European market, thanks to the collaboration with the shipping companies, existing offshore, fishing and aquaculture operators.

The goal of Ocean Sovereign’s business model is to have environmentally friendly vessels, while sustainability, fish welfare and inclusivity are considered in everything we do.

“Ocean Sovereign’s business model goal is to have environmentally friendly vessels, while sustainability, fish welfare and inclusivity are considered in everything we do. We want to include local fishermen from Europe and the United States in part of the production – about a third will be reserved for them and they will be able to supply their own local market with the fish they bring back from the Ocean Ark”, explains Morris . .

“Our initial deployment plan will be oriented towards European and American markets, closer to the respective coasts, which will reduce emissions in transport. We will breed warm and cold water species such as – but not limited to – salmon, black cod and kanpachi. We are currently reviewing the best flag conditions for vessels with local authorities,” concludes Morris.

There is a big problem with the Asus Zenfone 9