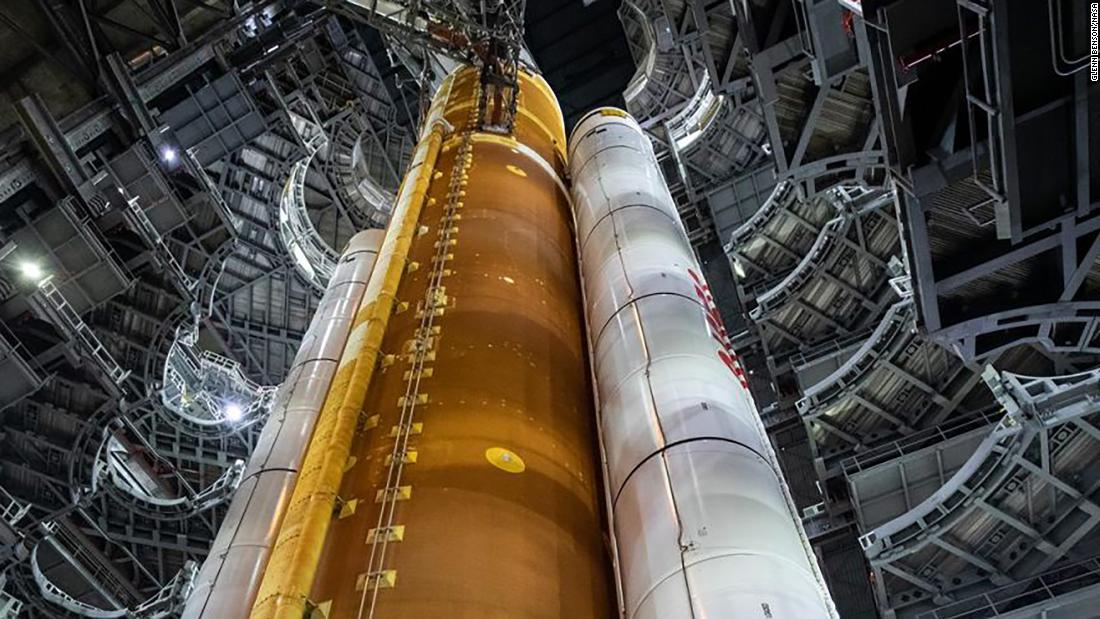 The massive 322-foot-tall (98-meter) stack, which includes NASA’s Space Launch System rocket topped by the Orion spacecraft, will roll out for its test debut at Kennedy Space Center in Florida on Thursday.

The integrated stack, which sits on a mobile launch vehicle, will begin its slow advance to launch position Thursday afternoon, with live coverage available on NASA’s website beginning at 5 p.m. ET.

According to NASA, the 4-mile (6.4-kilometer) journey aboard one of NASA’s giant Apollo-era exploration robots from the assembly building to the launch pad could take up to ‘At 11 o’clock.

“The deployment of the (Vehicle Assembly Building) is truly an iconic moment for this vehicle,” Tom Whitmeyer, associate administrator for Exploration Systems Development at NASA Headquarters, said at a press conference Monday. “Thursday will be a memorable day.”

After a few weeks of testing on the pad, the vehicle will be ready for its dress rehearsal on the weekend of April 1 – the final test before the launch of the first uncrewed Artemis mission beyond the moon and back to Earth. NASA is collecting names to put on a USB stick and send into space on the Orion spacecraft.

The wet dress rehearsal includes performing the full set of operations to load propellant into the fuel tanks and a launch countdown – essentially everything needed for a launch without an actual launch. During the hours of preparation leading up to the wet dress rehearsal, more than 700,000 gallons of cryogenic propellants will be loaded into the rocket

If the test is successful, the stack will return to the assembly building until it is ready to launch.

“Artemis I is such an important mission for us,” Howard Hu, Orion program manager at NASA’s Johnson Space Center in Houston, said at Monday’s press conference. “It brings together very critical engineering data and validates our ability to perform as a spacecraft for our next mission and beyond – Artemis 2 with crew and future missions as we go further and expand our capabilities. in the solar system.”

The Artemis program has experienced a multitude of delays. The mission was originally scheduled to launch in November 2021, but the pandemic, storms like Hurricane Ida and other factors have lengthened the mission’s timeline.

Artemis I is the first step in NASA’s ambitious program to land the first woman and first person of color on the moon later in the 2020s. Everything is in the works to establish a long-term lunar presence and prepare to explore Mars. Depending on the results of the wet dress rehearsal, the uncrewed mission could launch in May, June or July.

During the flight, the uncrewed Orion spacecraft will launch atop the SLS rocket to reach the moon and travel thousands of miles beyond – further than any spacecraft intended to carry humans has ever travel. This mission should last a few weeks and will end with the stranding of Orion in the Pacific Ocean.

Artemis I will be Orion’s final proving ground before the spacecraft flies astronauts to the Moon, 1,000 times farther from Earth than where the space station is, Cathy Koerner said. former head of the Orion program, in October. Koerner is now NASA’s Deputy Associate Administrator for Exploration Systems Development.

Following the uncrewed flight of Artemis I, Artemis II will be a crewed flyby of the moon, and Artemis III will return astronauts to the lunar surface. The timing of subsequent mission launches depends on the results of the Artemis I mission.

Artemis I will ride on Crawler Transporter-2 for its journey to the launch pad, just as shuttle missions and Apollo Saturn V rockets once did.

The 6.6 million pound (3 million kilogram) robot will transport the massive rocket stack and its mobile launcher at a top speed of 1 mile per hour (1.6 kilometers per hour).

The iconic robot is one of two that have operated for more than 50 years at Kennedy Space Center. They were first operated in 1965 and can each carry 18 million pounds (8.2 million kilograms), the weight of more than 20 fully loaded 777 jets, according to NASA. They are so wide that a pro baseball field could sit on each track.

“It’s going to be amazing,” Charlie Blackwell-Thompson, Artemis launch director for NASA’s Exploration Ground Systems program at Kennedy Space Center, said Monday. “It has been in service for more than 50 years and has undergone significant upgrades as part of the preparation of this vehicle and the operations of Artemis.”

After the upgrades, Crawler Transporter-2 should be able to continue carrying massive rockets to the launch pad for years to come.